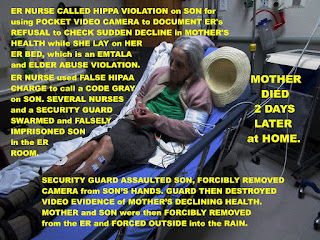 This is a unauthorized lead in to the Article. This is my Mother in her ER Room and Bed, being repeatedly denied treatment for her sudden onset of Wheezing, which occurred while she was in the same ER that apparently the head of the California Medical Board Practices within. I was terrorized by an ER Nurse who absolutely refused over 20 or 30 or 40 or 50 pleadings of mine to just check my Mother's Chest Wheezing, which started while she was in her ER bed. Refusal after Refusal by the ER Nurse to simply recheck My Mother's Oxygen level and her blood pressure after the monitoring equipment started flashing red and sounding an alarm. The ER Nurse actualy disconnected the equipment and refused to remonitor my Mothers levels. The ER Nurse called a Code Gray on me because I documented the non treatment of My Mother with my Camera. Our room was flooded with ER Nurses and a Security Guard. My Camera was taken from me and the Video erased, and yet, through the entire gut wrenching experience, not one Nurse walked up to my Mother to check on her breathing. I was imprisoned in the ER room until my video was erased, and I was psychologically terrorized by 3 Nurses and the Security Guard who blamed me for being selfish because they could not get back to their own patients even though all I was asking for was a check of my Mother's Chest wheezing and her broken words when she spoke, something she never normally has. Mom died at home 2 and 1/2 days later. I could not get anyone to help me get her directly into another ER without waiting in the waiting room during last year's Flu epidemic. Does anyone see the irony of a the President of the California Medical Association calling out another ER for poor treatment when the ER he works in did equal or possibly worse due to the repetitive willingness to violate EMTALA at all costs.

Now read the article and how outraged the President of the California Medical Association was over the poor treatment he received in another ER, possibly from another State. Meanwhile the ER he WORKS in, played the role of grim reaper in the Death of my own Mother in March of 2018. Wow. Story begins below.

The new president of the California Medical Association was expecting to spend New Year's at a wedding in Las Vegas.

Instead, David Aizuss, MD, posted on Facebook about his "eye opening" first-hand view of "American medicine at its worst." (The post is visible only to his Facebook friends and he declined MedPage Today's request to elaborate, citing ongoing "medical issues.")

In his post, Aizuss said he was rushed by ambulance to a hospital Monday morning. "I spent hours in the emergency room where I received inadequate treatment of mind boggling pain, was never touched or examined by a physician, was mixed up with another patient and almost inadvertently transferred to another hospital, (and) was scheduled for emergency surgery based on a third patient's lab work that was confused with mine," he wrote.

He "finally signed out of the hospital against medical advice so I could obtain care from physicians that I know and trust." He did not name the hospital.

Aizuss, an ophthalmologist who practices in Calabasas, northwest of Los Angeles, posted his complaint New Year's Eve, apparently while at the LAX International airport in Los Angeles, where he said he was "just returning from Las Vegas where we were supposed to attend a wedding."

Dozens of Facebook friends, several apparently also physicians, expressed their shock that the CMA president could receive such poor emergency room response, and some said they were happy he was speaking out about poor quality of hospital care.

"If you get terrible care like this (at least you know the difference) think about the care that Joe Sixpack gets; he doesn't have the resources to get better care. This system is broken and we need to fix it," posted one.

Wrote another, "As president of the CMA, your voice can be loud! Don't be timid and do not be afraid of making enemies. Remember our patients know and respect us when we stand against poor medicine."

Aizuss ended the post by saying, "Truly an eye-opening experience for the President of the California Medical Association. Happy New Year to all!"

He began his one-year term as CMA president in mid-October, saying he wanted to focus on physician burnout, practice sustainability, and payment. He is also past chairman of the CMA Board of Trustees.

He is a medical staff member at Tarzana Hospital and West Hills Hospital, in Los Angeles County, and serves as an assistant clinical professor of ophthalmology at the UCLA Geffen School of Medicine.