How Congressionally Approved Unfunded Mandates are Wreaking Terror and Death on Hospital Patients.

The reality is, Law Enforcement in general won't investigate violations of various laws such as EMTALA, Incitement to Imminent Lawlessness, False application of HIPAA rules, Elder Abuse, Falsified Code Gray Alarm, False Imprisonment, Assault, and Destruction of Evidence if the perpetrators work in an ER or Hospital.

The Damage being done by lack of enforcement of the Medically related Unfunded Mandates mentioned above are far reaching. By not funding / enforcing basic common decency and protection of Hospital patients from illegal acts by a Rogue Nurse or Doctor, especially against the elderly, Accusations are dropped if they are made by non-minorities, and if the accusations are made by minorities, they are recategorized as being racial in nature.

The re categorization of the Violation of Medical Laws into racial charges divides the country. How is a "non-minority" supposed to feel when a minority is charging racism for a medical violation of the law when the non-minority had the same thing happen to their own family member or loved one?

If the identical abuse of Medical Laws happen to both a minority and a non-minority, but the minority files a claim of racism in court, what is the non minority supposed to file? If the non-minority files a claim of racism in court, I am pretty sure if anyone on the jury is a minority, they will not necessarily be sympathetic to the alleged racism accusation of the family or the victim of a non minority. But the non-minority's only other option will be to sue and pay a private attorney a lot money.

Minorities may mistakenly be thinking that the non-minority will have law enforcement watching their back, and that is just not true.

Whether planned or not, the lack of funding for Congressional Mandates regarding the safety and proper treatment of all citizens in the Hospital and ER has helped create an ongoing air of divisiveness between all ethnic groups. What is a non-minority supposed to think and feel if they are on a jury for a case about racism when the EXACT same thing happened to someone in their own family and the non-minority has been led to believe that they can't file racism charges but a minority can?

Since Congress has not funded enforcement of health related mandates, the non-minority's only recourse is to pay for a lawyer, assuming they have the funds. A non minority cannot make a claim of racism even if they are the victim of the exact same mistreatment as a minority.

The result is minorities and non-minorities have been pitted against each other while Congress makes themselves look good by publicly clamoring that they expect several Health related laws and rules to be enforced, even though no funds have been allocated to law enforcement to enforce these necessary laws. 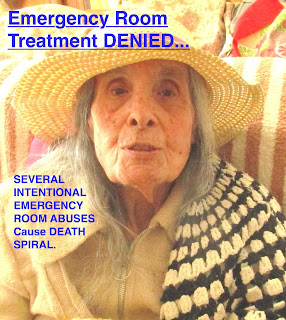 My dear, sweet, 91 year old mother was basically killed after ONE ER Nurse broke as many as 9 Laws by not treating my mother when her condition worsened while she was on the ER Bed. It's a nightmare I will never forget. I am pretty sure I have PTSD because of how my mother was mistreated. Finding out that Law Enforcement won't investigate was another crushing blow. 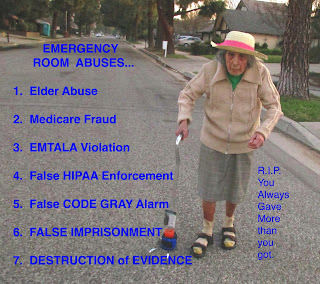 In the future, whenever I hear about racism being the reason one person dies in the ER and another one does not, I will think about my mother and realize that racism accusations are preventing people of all races to unite and complain to the government about the government's role in making themselves look good by creating laws and guidelines that they do not provide funding for. 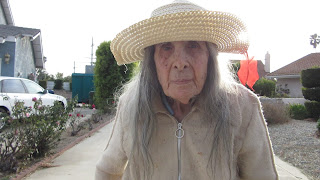 If there is a law student or lawyer or law school professor who really wants to make a difference, lets sue the Federal Government for not funding Health related mandates that have fooled the public into believing they are being protected, when they are not. 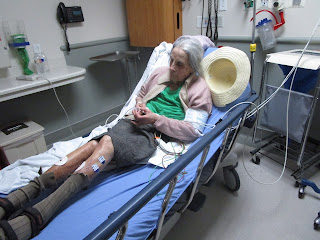 This was my Mother, just before she started wheezing in her ER Bed. The ER Nurse ended up breaking NINE LAWS just so she could avoid adding anything to my mother's medical report so there would be no proof of her wheezing. When I pulled out my camera to document the ER's refusal to triage my mother's wheezing, a HIPAA violation was called on me, a Code Gray was then called on me, which means Combatant in the ER, and our room was swarmed by six nurses and a Security Guard.

We were imprisoned in that room until my Video Camera was forcibly removed from my grip and the Video was erased, aka destruction of evidence and assault. We were then forced to leave the ER and into the rain under Security Guard accompaniment.

The shock of seeing all those nurses treat me like a combatant, their arms crossed, refusing to check my mother out, haunted me and paralyzed me. Their taunts of us preventing them from seeing their patients also haunts me. Other things happened that were equally disgusting by other members of the Medical community, and my mother died less than 3 days later at home without ever being properly treated for her wheezing. The one ER Nurse was able to use Incitement of Imminent Lawless by others to get her way, which directly led to the death of my Mohter.

Posted by Alessandro Machi at 3:50 PM